Gregory Gourdet a native of New York City, is an American chef, writer, and restaurateur. He is a former finalist on the twelfth and seventeenth seasons of the reality cooking show Top Chef which aired on Bravo. Gourdet is the owner of Kann a Haitian pop-up restaurant. He has previously worked as an executive chef and culinary director of Departure at The Nines in Portland.

Gourdet stands at an average height and is of moderate weight. He has black hair and dark brown eyes. The exact details about his body measurements will be updated soon.

Gregory was born in New York City, New York and raised in Queens. He was born to his parents, Haitian immigrants. He went to St. Andrew’s (Delaware) and then later enrolled at NYU where he studied Pre-Med. He joined the University of Montana (UM) where he studied wildlife biology and graduated with a degree in french.

Gregory is openly gay. He came out in college. He has however not disclosed any information about his past or current relationships. Further details about his relationship will be updated. 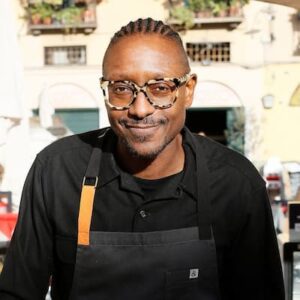 In 2015, Gregory participated in the 12th season of the reality tv show Top Chef on Bravo. He was a runner-up. In 2020, he participated in the seventeenth episode of Top Chef also known as Top Chef: All-Stars L.A. He was able to finish as a finalist. In addition, he has appeared as a guest judge on Top Chef season 8, Top Chef Amateurs and Top Chef Family Style.

Gregory started working for Chef Jean-Georges Vongerichten in 2000 who mentored him for about seven years. In 2010, he started working as an Executive Chef of Departure Restaurant + Lounge in Portland, Oregon. He was later promoted to Culinary Director when the brand expanded to Denver, Colorado.

Gregory is the owner of the Haitian restaurant Kann. He was to open the restaurant in 2019 after 10 years as an executive chef and culinary director of Departure at The Nines. However, due to Covid-19, he had to push back his plans. In 2020, he opened a Portland Kann pop-up in Portland.

Gourdet is the author of the cookbook Everyone’s Table: Global Recipes for Modern Health. The book is a guide to cooking dishes that are free of dairy, gluten, soy, legumes and grains. The book, was published by Harper Wave Books released the book on May 11, 2021. The book is a national bestseller.

Gourdet has an estimated net worth in the range of $1 million – $5 million.