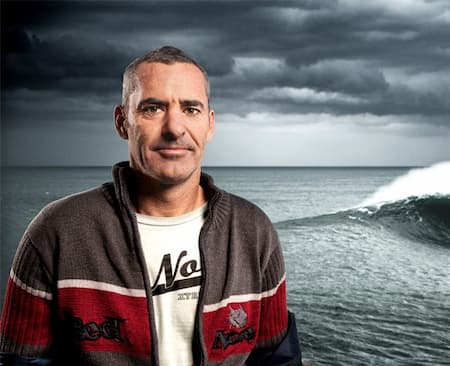 Garrett McNamara a native of Pittsfield, Massachusetts is an American professional big wave surfer and Waterman. He is known for breaking the record of the biggest world wave ever surfed at Nazare, Portugal.

A surfer and Waterman, Garrett stands at an average height of 5 feet 10 inches. He weighs 79Kgs (175lb). There are no further details about his body measurements. However, these details will be updated as soon as they are available.

Garret was born in Pittsfield, Massachusetts. For most of his childhood, he lived in Berkeley, California. He was born to his parents whose names he has not yet mentioned. He grew up together with his younger brother Liam McNamara. While both boys were young, their mother took them to Central America.

Being a victim of domestic abuse, she often abandoned them. Their mother later took them back to America. His mother would then take him to Berkeley to live with his father but after a while, came back for him together with a new lover. In 1978, they moved to the North Shore of Hawaii.

Garret is best known for breaking the world record for the largest wave ever surfed at a height of 78 feet in Nazare, Portugal in 2011. However, this record was later broken by Rodrigo Koxa, who surfed an 80-foot wave. 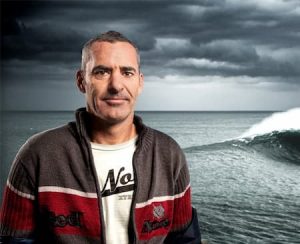 McNamara started surfing at the age of 11 at Sunset, Waimea. At the age of 17, entered and placed in the prestigious Hawaiian Triple Crown Series. He was able to attract sponsors from major Japanese brands. In the 1990s, Garrett joined the Tow Surfing movement.

In January, he suffered a severe wipeout on a 50-foot wave at Mavericks in California. November 2011, Garret broke the world record for the largest wave ever surfed at a height of 78 feet in Nazare, Portugal. McNamara would later break his own record by surfing an approximated 100-foot (30 m) wave in January 2013.

Besides surfing, McNamara is also involved in Stand Up Paddle. He has helped in designing and creating SUP boards for a more extreme experience. He also ventured into big wave venues like Waimea, Puerto Escondido, and Mavericks. In 2009, he competed in the World Stand Up Paddle Surfing Championship.

McNamara is a happily married man, he has been married to his wife Nicole McNamara since November 2012. Their wedding took place at Praia do Norte, Nazaré, Portugal. Garrett has two children together with his current wife.

Their firstborn child Barrel was born in 2015 and their second child Theia Love Nazaré Celeste Rose was born in 2018. Garret has been married once before. He has three other children from his previous marriage.

McNamara’s net worth is estimated to be in the range of $1 million – $5 million. He has earned his net worth from his career as a big wave surfer.