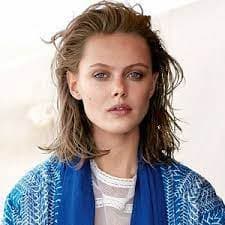 Gustavsson stands at a height of 6 feet o inches (1.85 meters) and weighs about 61 Kgs (134 lbs). Her hair color is blonde paired well with her blue-grey eyes. Further details will however be updated as soon as they are available.

Frida was born and raised in Stockholm, Sweden. She was born to her parents whose information she is yet to disclose to the public. The model has not revealed much information about her childhood. However, this information will be updated soon.

Frida was previously married to her ex-husband Hjalmar Rechlin a Stockholm-based photographer. Their wedding took place in Stockholm at the Katarina Church. Her wedding dress was featured in a number of fashion magazines. They divorced in 2017. In 2018, Frida started dating Marcel Engdahl, a model and currently the Label Manager at Northern Electronics.

Gustavsson was cast to play the role of the great Viking warrior Freydis Eriksdotter in the Vikings sequel Vikings: Valhalla which premiered on February 25, 2022. She has also appeared in other film and tv shows like; Swoon, Tigrar, The Witcher, The Inspector and the Sea, Arne Dahl: Efterskalv, and När karusellerna sover.

Frida started her modeling career in 2008 and moved to Japan later that year. She went on to open the Valentino Haute Couture fall 2012 show in Paris. She has since then walked shows for; Dolce & Gabbana, Givenchy, Yves Saint Laurent, Ralph Lauren, Blumarine, and Versace.

In 2012, she walked in the Victoria’s Secret Fashion Show. In addition, she was made the new face of Maybelline. Frida has appeared in various magazines like; Elle, W, Numéro, Vogue, L’Officiel, and Crash.