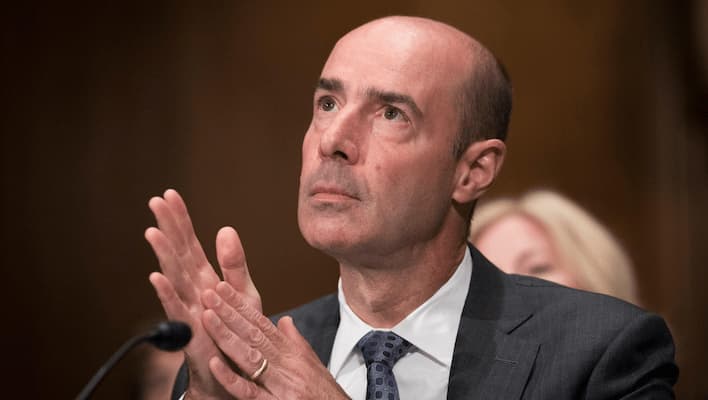 A native of Columbus, Ohio, Eugene Scalia is a partner in the Washington, D.C., office of the law firm Gibson, Dunn & Crutcher. He is the son of late U.S. Supreme Court Associate Justice Antonin Scalia.

Scalia was in July 2019, nominated by President Trump for the United States Secretary of Labor.

Scalia was an undergraduate at the University of Virginia. He was majoring in economics with a minor in political science.

Scalia is a married man. He is married to his wife Patricia. Nothing much is known about their marriage. However, as of 2002, the couple had four children.

From 1985–1987, Scalia was an aide to Education Secretary William J. Bennett. Later from 1992–1993, he served as Special Assistant to Attorney General William P. Barr.

He was in private practice in Washington, D.C., and Los Angeles, California, concentrating in labor and employment law and administrative law.

Scalia served as the solicitor (chief legal officer) of the Department of Labor, after being appointed by President George W. Bush in April 2001.

The position was taken in January 2002 following a recess appointment by Bush. Scalia was accused by Democratic Senators of being hostile to workers and criticized for his articles criticizing ergonomics.

After Scalia returned to private practice, he argued for the plaintiffs in Wal-Mart v. Maryland in July 2006; which invalidated a state law under which large companies with at least 10,000 employees would have been required to spend at least 8% of their payroll on employee healthcare.

On July 18, 2019, President Trump announced that he would nominate Scalia to be the next United States Secretary of Labor.

President Trump tweeted; “I am pleased to announce that it is my intention to nominate Gene Scalia as the new Secretary of Labor. Gene has led a life of great success in the legal and labor field and is highly respected not only as a lawyer but as a lawyer with great experience….”

“Working with labor and everyone else. He will be a great member of an Administration that has done more in the first 2 ½ years than perhaps any Administration in history!” Trump continued.

The position was left vacant after the resignment of Alexander Acosta.

Eugene Scalia Salary and Net Worth

It is not yet known how much Scalia earns. His net worth is estimated to be around $2 million.