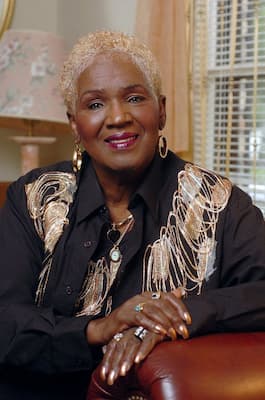 A native of Michigan, Etterlene DeBarge is an American gospel singer, songwriter, and matriarch of the American R&B/Soul vocal group DeBarge.

She is also the author of Other Side of the Pain. The book talked about her struggles in her marriage to her children’s father.

It also documented her children’s rise to fame as well as their struggles under the glare of the spotlight.

Etterlene was born in Royal Oak, Michigan. She was one of twelve children and has a twin sister.

As a child, her family moved to the Brewster-Douglass housing projects, located on the east side of Detroit. Some of her siblings are Phoebe Marshall, William Charles Abney, Jr., Marjorie Brooks, Mamie Braden, Ernestine Allen, and Clara Hendricks.

She and Robert DeBarge got married in 1953 settling in a predominantly black section of Detroit, where they had ten children.

In 1974, she divorced Robert DeBarge. She later got married for a second time. This time to George Rodriguez, a Puerto Rican, leading to the erroneous rumor that the DeBarge family was half-Hispanic.

During her 21 year marriage to Robert DeBarge, Etterlene had ten children who are;

Etterlene is a religious woman. In 1991, with the help of her famous children, she released a gospel album, Back on Track, under the DeBarge Family moniker.

Later in 2005, she released a second gospel album, A City Called Heaven. She currently lives in California.

Tommy later joined the band which first went by the moniker, First Class. The group’s debut album, yielding the hit “There’ll Never Be,” sold over one million copies and started the DeBarge musical dynasty.

Later in 1979, Bunny, Marty, Randy, El, and James signed with Motown as the DeBarges. They released their debut album two years later under the guidance of Bobby and Tommy, who left Switch that year to begin mentoring their siblings.

In 1992, the group, now known as DeBarge, found fame with the singles, “I Like It” and “All This Love.” They went on to make several more hit singles, such as “Time Will Reveal,” “Love Me in a Special Way” and “Rhythm of the Night,” reaching R&B superstardom by the mid-1980s.

Their younger brother Chico became a solo success first with his 1986 dance-pop single, “Talk to Me,”. Later after a stint in prison, he made more soulful singles such as “Iggin’ Me” and “No Guarantees.”

The youngest brother of them all, Darrell, released his first solo album in 2005 continuing on the DeBarge name as various members continued solo careers.