In 2003, he won the Best Recipe Award for his “Turkey and Hot Sausage Chili. In addition, Lagasse is a regional James Beard Award winner, known for his mastery of Creole and Cajun cuisine and his self-developed “New New Orleans” style.

He has additionally appeared on a wide variety of cooking TV shows, including the long-running Food Network shows Emeril Live and Essence of Emeril. He is also associated with several catchphrases, including “Kick it up a notch!” and “Bam!”.

Born as Emeril John Lagassé III, he is 61 years old as of 2020. Emeril was born on October 15th, 1959 in Fall River, Massachusetts, United States. He celebrates his birthday on October 15th every year.

The amazingly talented chef, Lagasse, measures a standing height of 5 feet 7 inches tall which is equivalent to 1.71 meters. However, his weight as well as his other body measurements are currently under review and will soon be updated.

John Lagasse was born in Fall River, Massachusetts to a French-Canadian family from Quebec. He is the son of Emeril John Lagassé, Jr., his father, and a Portuguese mother, Hilda Medeiros. His mother, Hilda Medeiros Lagasse died on August 24, 2016. However, there is no known information about his siblings nor his other relatives. This information is currently under review and will soon be updated. 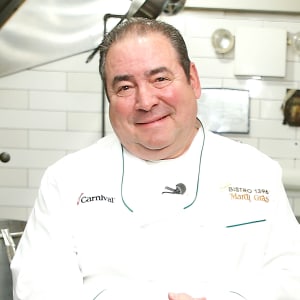 While working at the Venus De Milo Restaurant in Swansea, Massachusetts in order for Emeril to pay his way in school, he met his soon-to-be lover and first wife, Elizabeth Kief. The two dated and soon got married. However, details about their relationship are unknown although it is known that the two divorced later on, and Lagasse married a second time to a fashion designer called Tari Hohn but it, unfortunately, ended up in a divorce. On May 13th, 2000, he married the third time to a real estate broker, Alden Lovelace. The couple got blessed with two children. Lagasse and his family moved to Destin, Florida in 2011.

When Lagasse was a teenager, he worked in a Portugues bakery and it was here that he discovered his talent for cooking and subsequently enrolled in a culinary arts program at Diman Regional Vocational Technical High School. He earned a scholarship to the New England Conservatory of Music for his talent as a percussionist. He chose to attend Johnson & Wales University instead in hopes of becoming a chef. He attended Johnson & Wales in 1978. Years later, the school awarded him an honorary doctorate.

In 1978, Emeril graduated from the culinary school JWU and became Executive Chef at Dunfey’s Hyannis Resort in 1979. In 1983, Lagasse was nominated as Chef of the Year. He succeeded Paul Prudhomme in 1982 as executive chef of Commander’s Palace in New Orleans under Richard Brennan, Sr.

He led the kitchen for seven and a half years before leaving to open his own restaurant. He opened Emeril’s in New Orleans in 1990. It was designated “Restaurant of the Year” in Esquire magazine that year and has been a recipient of the Wine Spectator Grand Award since 1999.

Many of his restaurants, as well as his corporate office, Emeril’s Homebase, are located in New Orleans. In August 2006, Lagasse, contributed several recipes to the meal selection aboard the International Space Station, as part of a general NASA effort to improve the quality of the food supply for astronauts.

His cuisine in particular was selected in the hopes that the spicier fare would offset the reported tendency of microgravity to deaden flavors. Lagasse is the executive chef and proprietor of thirteen restaurants in New Orleans, Las Vegas, Orlando, and Bethlehem, Pennsylvania.

Emeril Lagasse Net Worth and Salary

Over the years of his career, Emeril has made a great fortune from his career as a chef. He has an estimated net of $70 million. However, his annual salary is currently under review and will soon be updated.