Elsa Pataky born Elsa Lafuente Medianu is a Spanish model and actress. She is best recognized for her role as Elena Neves in Fast & Furious. She has also appeared in films like Snakes on a Plane, Giallo and Give ‘Em Hell, Malone.

Elsa stands at an estimated height of 5 feet 4 inches (1.61 meters) and weighs about 51 Kgs (112 lbs). Her waist and hips measure 24 inches and 33 inches respectively. Her hair is blonde and she has blue eyes.

Pataky was born and raised in Madrid, Spain. She was born to her father José Francisco Lafuente, a Spanish biochemist, and her mother Cristina Medianu Pataky, a Romanian publicist. Her surname Pataky comes from her maternal grandmother Rosa Pataky. She was raised alongside her brother Cristian Prieto Medianu, a cinematographic director.

Elsa met her husband actor Chris Hemsworth in early 2010 through their representatives. They started dating and then later married during the Christmas holidays in 2010. The two are proud parents to three children; India Rose Hemsworth, Sasha Hemsworth, and Tristan Hemsworth. 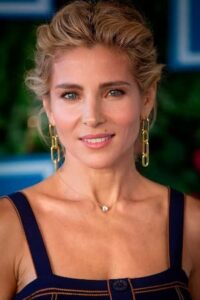 In 2013, Pataky was cast as a stand-in for Natalie Portman in the end credit scene in Thor: The Dark World. Pataky played the role of Señora Vera Hidalgo in the television series Queen of Swords. She was cast to play a recurring role of teacher Raquel in the tv series Los Serrano. The actress was a member of the Madrid theatre company Teatro Cámara de Ángel Gutiérrez. After leaving school, she joined the cast of the television series Al salir de clase.