Duff was born in Detroit, Michigan, and raised in Missouri. His parents Morrie Goldman, and Jackie Winch divorced when he was 10 years old. He lived in both Northern Virginia and Sandwich, Cape Cod, Massachusetts. He has a sibling called Willie Goldman.

Duff is happily married to his wife Johnna Colbry. He proposed to his wife on April 2, 2018. They tied the knot in 2019. The married couple announced that they were pregnant with their first child on August 8, 2020. Their daughter was born Josephine Frances Goldman on January 31, 2021. 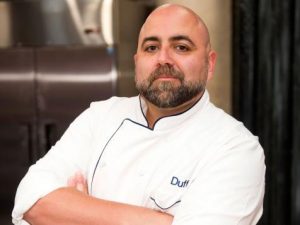 Duff and his wife announced that they were pregnant with their first child on August 8, 2020. Their daughter was born Josephine Frances Goldman on January 31, 2021. She weighed at 8 lbs., 2oz., and was 21 inches long.

Duff went to McLean High School in McLean, Virginia. He graduated from Sandwich High School in 1993. He later enrolled at the University of Maryland, Baltimore County. He has attended Corcoran College of Art and the Culinary Institute of America at Greystone in Napa Valley, California.

Duff opened Charm City Cakes in 2002. He initially worked in his house in Charles Village in Baltimore. He started with only two employees but with increasing demand, he added more employees. He has made cakes for Barack Obama’s second inaugural ball, Sir Roger Moore and Tom Clancy.

Duff started working in kitchens at the age of 14 at a bagel store and later at McDonald’s. He was later offered a job at Charleston cooking cornbread and biscuits. He has previously worked as a stagiaire at the French Laundry and as executive pastry chef of the Vail Cascade Hotel in Colorado.

Goldman has an estimated net worth of $5 million as of 2021.