Dr. Imani Walker is an American psychiatrist based in Los Angeles, California. She is best known as a cast on the reality TV series Married to Medicine: Los Angeles.

Imani stands at a height of 5 feet 9 inches.

Information about Imani’s parents and siblings is not available. However, she revealed that her father and uncle struggled with substance abuse when she was growing up. 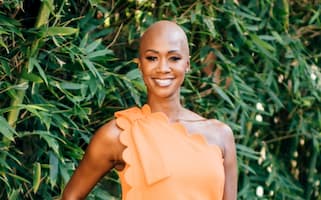 Imani is married to her husband Phil Johnson, The couple has been married for more than 6 years. Imani celebrated their 10th anniversary since they met in November 2018 in an Instagram post that read;

“Ten years to the day we met and five years married. Thank you for always having my back and offering me the type of advice only someone you call your best friend can provide. Happy anniversary to us!!!”

Imani and her husband Phil Johnson, have one child, a son named Idris.

Imani’s net worth is under review.

Most of Imani’s followers and fans wanted to know why the doctor is bald. In 2019, she took to Instagram to explain why she is bald.

“Bald is beautiful but I don’t have cancer or alopecia. “Much love to those who do but my baldness is by choice,” the doctor wrote.

In a video, Imani also said; “I shaved my head bald. It’s a choice; it’s something I’ve been doing probably for the past 20-plus years… I shave my head because I just feel like it.”

Imani works as a psychiatrist. She is also the medical director of Gateways Hospital & Mental Health Center. Speaking on how she maintains her own mental health while working, Imani said;

“Patients themselves don’t take a toll on me… If anything it’s an enjoyable challenge. The real toll is the administrative stuff.”

Her self-care strategies include delegating tasks, meditating, exercising, and occasionally going to the spa.

Imani is a cast member of the American reality television series Married to Medicine: Los Angeles which airs on the Bravo cable network.