A native of New York, New York, United States, Dominique Thorne is an American actress. She starred in the films If Beale Street Could Talk as Judas and Sheila Hunt and the Black Messiah as Judy Harmon.

Thorne attended Professional Performing Arts School in Manhattan (PPAS) where she studied dramatic theatre formally. During her senior year of high school, she won the 2015 Young Arts Award in Spoken Theater as well as the U.S. Presidential Scholar in the Arts, which is given annually by the White House.

After applying to a number of universities for both academics and art programs, she decided to attend Cornell University, where she received her bachelor’s degree in Human Development with a minor in Inequality Studies. She graduated in May 2019 and was a member of the Sphinx Head secret senior honors society. As of 2020, she and her family live in Delaware. 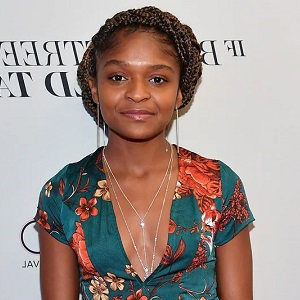 Thorne was born and raised in New York to parents Nerissa Guy and Navie Guy, who are Trinidadian immigrants. She has two brothers, Caleb and Ky-Mani.

Thorne has not come publicly about her relationship. However, our efforts to find out more about her partner came to no avail as no such information is publicly available. Thus, the identity of Thorne’s boyfriend is still unclear. It is also not known if she has any kids. We will update this section once this information is available.

Thorne has an estimated net worth of between $1 million and $5 million.

In 2018 Thorne made her feature film debut as Shelia Hunt, the ill-tempered younger sister of main character Fonny Hunt, in the film If Beale Street Could Talk, which was based on James Baldwin’s novel of the same name. In 2021 she played Judy Harmon, a member of the Black Panthers, in the film Judas and the Black Messiah.

In 2020, she was cast as the Marvel Comics superhero Riri Williams / Ironheart in the upcoming Marvel Cinematic Universe Disney+ television series Ironheart. She will make her debut in that role in the 2022 feature film Black Panther: Wakanda Forever.