A native of Clifton, Texas, United States, Dan Campbell is an American former tight end and football coach who is also the head coach for the Detroit Lions of the National Football League.

Campbell attended Glen Rose High School, where he was a tailback and tight end, and later accepted a football scholarship from Texas A&M University.

Campbell was born and raised in Clifton, Texas, the United States by his loving and devoted parents. However, our efforts to find out more about his parents came to no avail as no such information is publicly available. Thus, the identity of Campbell’s parents is still unclear. It is also not known if he has any siblings. We will update this section once this information is available. 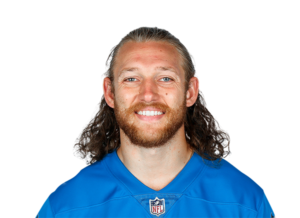 Campbell is happily married to his loving and caring wife Holly. The couple was blessed with two kids; Piper Campbell, and Cody Campbell.

Campbell has an estimated net worth of  $10 million.

In 2010, Campbell started his coaching career when he was hired by the Miami Dolphins as a coaching intern. In 2011, he was elevated to the tight ends coach. Following the firing of the Dolphins head coach Joe Philbin on October 5, 2015, he was named the interim head coach for the remainder of the 2015 season. Campbell led the team to five wins and seven losses.

Campbell was chosen by the New York Giants in the third round (79th overall) of the 1999 NFL Draft. In 2000, he began 4 games and was a part of the team that emerged in Super Bowl XXXV. In 2001, he became the team’s regular starting tight end after passing Howard Cross on the depth chart and was mainly used as a blocking tight end.

In 2002, his blocking helped Kerry Collins throw for a club record 4,073 yards and Tiki Barber rush for the second-best total in franchise history 1,387 yards.

On March 14, 2006, Campbell was signed as a free agent by the Detroit Lions. Known mostly as a blocking tight end, he posted career-highs in receiving yards (308), average per reception (14.7 avg), long reception (30 yards), and touchdowns (four), the most by a Lions tight end since 2001.