He is best known for being a host of the CBS late-night talk show The Late Late Show with Craig Ferguson (2005–14), for which he won a Peabody Award in 2009 for his interview with South African archbishop Desmond Tutu that year and for hosting The Hustler, an American television game show that airs on ABC.

Ferguson was born to his parents Robert and Janet Ferguson. He was raised along with his two sisters and one older brother. His younger sister, Lynn Ferguson Tweddle, is also a comedian, presenter, and actress, who voiced Mac in the 2000 stop-motion animation film Chicken Run. 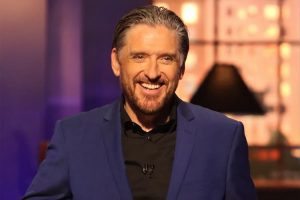 Ferguson was first married to Anne Hogarth from 1983 to 1986. Secondly, he married Sascha Corwin a founder and proprietor of Los Angeles’ SpySchool, with whom he has one son, born in 2001.

In 2008, he married Megan Wallace-Cunningham an art dealer in a private ceremony on her family’s farm in Chester, Vermont. They have a son together, who was born in 2011.

Ferguson previously presented the History channel’s Join or Die with Craig Ferguson (2016) and the syndicated game show Celebrity Name Game (2014–17), for which he received two Daytime Emmy Awards. Couple Thinkers, a six-episode web show he co-created with his wife Megan Wallace Cunningham, was published in 2017.

Ferguson began his career in the United Kingdom with music, satire, and theatre before moving to the United States to play Nigel Wick on the ABC sitcom The Drew Carey Show (1996–2004).

Ferguson is the author of three books: Between the Bridge and the River, a novel; American on Purpose, a memoir; and Riding the Elephant: A Memoir of Altercations, Humiliations, Hallucinations, and Observations, a memoir. He is a dual citizen of the United Kingdom and the United States.

He has written and starred in three films, as well as directing one of them, and has acted in a number of others, including many animation voice-over roles. Also, he voiced Gobber in the How to Train Your Dragon film series from 2010 to 2019, Owl in Winnie the Pooh (2011), and Lord Macintosh in Brave (2012). Ferguson has anchored the ABC television network’s American game show The Hustler since 2021.

Ferguson has an estimated net worth of $8.5 million.