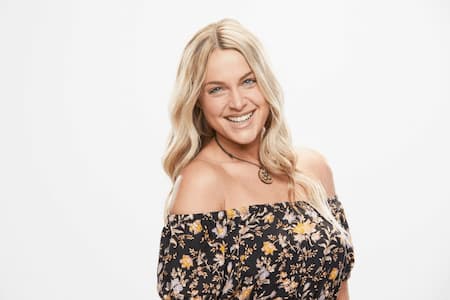 Christie Murphy is an American television personality who was one of the houseguests of Big Brother Season 21. Her favorite activities include going to the park with her dog.

According to her profile on CBS, she said; ” I love to go to the park with my dog, I like to do basically ANYTHING in nature, specifically waterfall hikes and I also like to try new food and restaurants with friends.” Murphy is a boutique owner.

Murphy is a family girl. She has a brother named Johnny Murphy who she is very close to.

She is also very close to her mother. In one of her posts, she wished her mother a happy birthday writing; “Happy Birthday to my rock. ♥️ I’m so proud of you & all you’ve accomplished & built for yourself.

I admire your drive, determination, independence & success. You light up any room with your outgoing personality & contagious smile. I feel lucky to have been guided by YOU in this lifetime. I love you always, in ALL ways Momma! 🎂😘”

Murphy is rumored to be dating Pascale Leonard. She and Pascal can be seen cuddling in several of their Instagram posts.

According to her bio, Murphy thinks the most difficult part about living inside the Big Brother house will not to be able to speak to the person running her store.

“I think for me, the most difficult part would be not being able to talk to whoever is running my store.

Obviously, I’ll hate not speaking to my friends and family as well, but by nature I’m a controlling person, so not knowing what’s going on at Mystic will be challenging! Also, no music. I’m such a musical person! I’m the “whistling girl.” I’m always either singing or whistling… so I’m definitely going to miss music!”

On which past Big Brother cast member she liked most, Murphy said; “I really loved Jeff and Jordan, and I really love the dynamic they had and the game that they played together.

“Gameplay-wise, I think Paul is incredible. I think he was a master at manipulating, and also a competition beast. Do I think he should have toned it down a little bit with the lying and playing everyone in the house? Yes. But I think he was savvy and strong! I also love Dan, but who doesn’t?”

When asked if she has a strategy for winning the game Murphy said;

“Yes! I do! I plan on using my sexuality as a major social advantage. I’m going into the house as the openly feminine lesbian.

“I will use my femininity and charm to easily persuade and subtly manipulate the men, while also being the emotional shoulder and best friend to all the girls.

“Little do the guys know though, I am super competitive, and an extreme overachiever and I plan on winning a lot of the competitions! I have a photographic memory and I’m also killer at puzzles!”

“If you want it, picture it, write it down, and envision yourself getting it, manifest the sh*t out of it… and it’s yours. Simple.” The power of INTENTION, man!”

Other houseguests on Big Brother 21 are;