Christi Ruth Paul a native of Ohio, is an American journalist. She is the former weekday news anchor for HLN and weekend anchor for CNN’s program New Day. She currently serves as a weekday co-anchor for WKYC in Cleveland.

Paul stands at an estimated height of 5 feet 5 inches and is of moderate weight. She has blonde hair paired well with her beautiful blue eyes.

Paul was born and raised in Bellevue, Ohio. She was born to her parents whose information she is yet to disclose. She grew up in a Christian household. Paul went to the University of Toledo where she graduated with a bachelor’s degree in broadcast journalism.

Paul is happily married to her husband Peter Wurm. The couple tied the knot in 2003. They have three daughters whose names they are yet to disclose. Christi was previously married to reporter and news anchor Rob Koebel. Paul and Koebel met in West Virginia and later moved to Boise and Phoenix. In 2012, Paul released her book titled Love Isn’t Supposed to Hurt. The book detailed her marriage and the domestic violence she encountered from Rob Koebel. 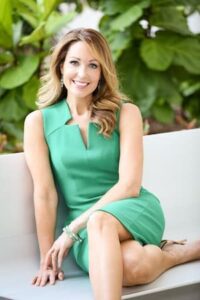 Paul started her journalism career at WDTV in Clarksburg, West Virginia as a news anchor, editor, photographer, and reporter. She then moved to KTVB in Boise, Idaho as a reporter and news anchor. While there, she covered the story of four-year-old Julianne Prudhomme who underwent a five-organ transplant.

Paul was honored by the Idaho Press Club for this story. In 2003, Paul joined CNN as a news anchor. She also anchored HLN, CNN’s sister station. She served as the weekend anchor for CNN’s New Day. Paul left the program on June 26, 2022. She currently serves as a weekday co-anchor for WKYC in Cleveland.

Paul has an estimated net worth of $5 million. She has acquired her impressive net worth from her successful career as a journalist.