A native of Fall River, Massachusetts, United States, Chris Santos is a New York City chef and the former executive chef and owner of The Stanton Social in New York’s Lower East Side. In late 2010, he opened Beauty & Essex, a 250-seat, 10,000-square-foot (930 m2) restaurant in the heart of the lower east side. He is a recurring guest judge on the Food Network show Chopped and is developing a show of his own.

Santos studied at Bristol High School in Bristol, Rhode Island, graduating in 1989. Upon graduation, Santos studied culinary arts at Johnson & Wales University in Providence, Rhode Island, initially planning on attending for only two years. However, after the school awarded him a fellowship, he remained for two more years studying restaurant and hotel management, graduating in 1993 with honors. 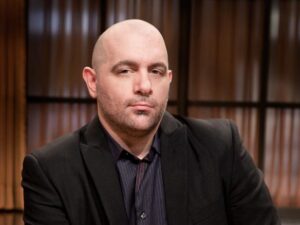 Santos’s parents’ names are not mentioned but his mother was of Irish descent and his father was of Portuguese ancestry. Santos is the youngest of four children, he has two brothers and one sister.

Santos is currently married to his longtime girlfriend, Taryn Santos. Although the details concerning the initial steps of their relationship are still unknown, as per some reports, it is believed that the couple was in a serious relationship before tying the knot in the year 2009.

Santos has an estimated net worth of $8 million.

Santos became the executive chef of the Latin restaurant Suba, which has won multiple awards. A year later, he moved to the same place at Mojo, located in Brooklyn, New York. At around the same period, he became the co-owner and executive chef of The Mexican Sandwich Company, situated in the same area. His most successful restaurant would be founded in 2005 called The Stanton Social. Since its beginning, countless magazines and newspapers have given it a lot of honor; the restaurant is cited for its extensive menu and its use of small plates that feature cooking from a group of cultures. Due to this, he was named the Star Chefs Rising Star Chef.

The victory of this restaurant led him to launch Beauty & Essex, which is his largest restaurant to date. The restaurant was acquired from the historic M. Katz Furniture store, containing two levels, a crystal chandelier, lounge, a two-story, and a 20-foot skylight. It was the hottest restaurant in the country, the destination of high-profile clients during its launch, and promoted him to celebrity status. One of his latest restaurants is called Vandal, and he is also set to open restaurants in Los Angeles and Las Vegas.