Chase Chrisley is an American reality television personality. He is best recognized for starring on the reality tv show Chrisley Knows Best alongside his rich family. He also stars in Growing Up Chrisley alongside his sister Savannah Chrisley. Chase is also best known as the son of real estate millionaire Todd Chrisley.

Chrisley was born on June 1, 1996, in Atlanta, Georgia. He is 25 years old as of 2021. Chrisley celebrates his birthday on the 1st of June every year surrounded by close friends and family.

Chase stands at an estimated height of 5 feet 5 inches. He is of moderate body weight, has blond hair and brown eyes. There are no further details about his body measurements. However, these details will be updated as soon as it is available. 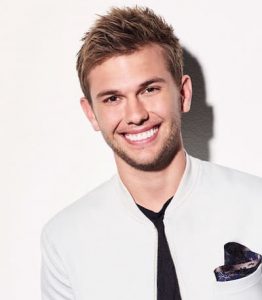 Chrisley was born and raised in Georgia, Atlanta. He was born to her parents Todd Chrisley and Julie Chrisley. Todd is a real estate tycoon while her mother is a housewife who loves to cook. Julie stars in the web series What’s Cooking With Julie Chrisley. This is not his parents’ first marriage.

Todd was previously married to his high school sweetheart Teresa Terry while Julie was married to her high school boyfriend. Todd and Julie tied the knot in 1996. Chase has four siblings. Two of them, Lindsie Chrisley Campbell and Kyle Chrisley are from Todd’s first marriage. The other two are Savannah Chrisley and Grayson Chrisley.

Chase and Emmy Medders had been dating for years before they officially decided to break up in 2021. Before their breakup, Chase wanted to propose to Emmy and had even bought a ring, despite his mother’s warnings that he was not ready to get married.

Chase stars in the reality tv show Chrisley know Best beside his rich family. The show airs on USA Network. Its original release date was on March 11, 2014.  The show initially took place in Roswell and Alpharetta, then moved to Nashville, Tennessee on its fourth season.

Chase and Savannah Chrisley star in their own spin-off show Growing up Chrisley. The show premiered on April 2, 2019.  The show follows his and his sister’s lives as they try to prove to their father that they can make it in the real world without his help. The two travel up to Los Angeles to pursue their dreams. Chase wants to be an actor while his sister wants to venture into the world of cosmetics.

Chrisley has an estimated net worth of $2 million as of 2021. He has earned all his wealth from appearing on the reality tv shows Growing Up Chrisley and Chrisley Knows Best.