A native of  Ivanhoe, Australia, Cate Blanchett is an Australian producer and actor. Considered one of the finest actresses of her generation, she is known for her versatile work across independent blockbusters, films, and the stage.

Blanchett attended primary school in Melbourne at Ivanhoe East Primary School; for her secondary education, she attended Ivanhoe Girls’ Grammar School and then Methodist Ladies’ College, where she explored her passion for the performing arts.

In her late teens and early twenties, she worked at a nursing home in Victoria. She studied fine arts and economics at the University of Melbourne but dropped out after one year to travel overseas. While in Egypt, she was asked to play an American cheerleader as an extra in the Egyptian boxing movie, Kaboria (1990); in need of money, she accepted. 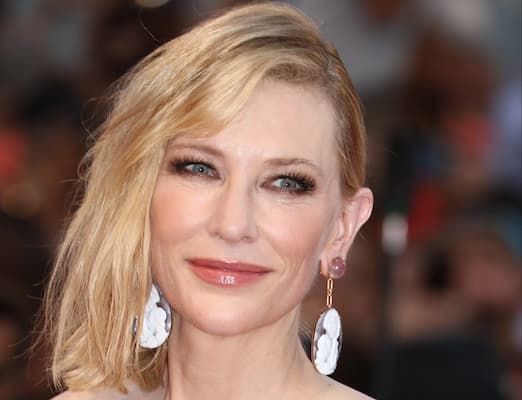 Upon returning to Australia, and after working in the pocket theatres of Melbourne, including La Mama, she moved to Sydney and enlisted at the National Institute of Dramatic Art (NIDA) and later graduated from NIDA in 1992 with a Bachelor of Fine Arts.

Blanchett was born and raised in Ivanhoe, a suburb of Melbourne. Her Australian mother, June née Gamble, worked as a teacher and property developer, and her American father, Robert DeWitt Blanchett Jr., a Texas native, was a United States Navy Chief Petty Officer who later worked as an advertising executive.

When she was ten, her father died of a heart attack, leaving her mother to raise the family on her own. She is the second of three siblings, with a younger sister and older brother. Her ancestry includes some Scottish, English, and remote French roots.

Blanchett is happily married to screenwriter and playwright Andrew Upton. They met in Australia in the mid-1990s and married on 29 December 1997. The partners have one daughter and three sons. Their sons are Ignatius Martin Upton, Roman Robert Upton, Dashiell John Upton, and daughter Edith Vivian Patricia Upton (adopted in 2015).

Blanchett has an estimated net worth of $95 million.

Blanchett has been a long-term supporter of individual and collective action on climate change and other environmental issues. In 2006, she joined former US Vice-president Al Gore’s Climate Project. In 2007, she became the ambassador for the Australian Conservation Foundation. She was made an honorary life member of the Australian Conservation Foundation in 2012, in recognition of her support for environmental issues.

At the beginning of 2011, Blanchett lent her support to a carbon tax. She received some criticism for this, particularly from conservatives. She is a patron of the international development charity SolarAid, which works to create a sustainable market for solar lights in Africa.

From 2008 to 2011, the Sydney Theatre Company under the leadership of Blanchett and her husband Andrew Upton initiated a complete large-scale environmental program called Greening the Wharf, which was funded by solar energy, rainwater harvesting, and energy efficiency measures, and best practice waste management. The program won a Green Globe Award which was accepted by her and Upton.

Blanchett is frequently considered to be among the finest actresses of her generation and has been noted for her ability to play characters from many distinct walks of life, as well as for headlining a wide range of film genres, from low-budget independent films to high-profile, mainstream productions. She has also been praised for her mastery over a wide array of various articulations, from Irish, English, and French to diverse regional American accents.

Remarking on her request as a screen actor in Vulture, Tim Grierson and Will Leitch stated that her most prominent skill was “her ability to combine elusiveness and relatability: She is always totally present and yet just out of grasp. She has been forever uncompromising, daring, and perpetually, firmly, herself.”Her performance in the film Carol was ranked as the 2nd best movie performance of the decade by IndieWire in 2019.

Writing of her performance in the film, Christian Zilko states, “The greatest performance in a career where almost every role feels like a legitimate contender, Cate Blanchett’s take on Carol Aird is a veritable symphony of repressive silence.”

Blanchett has been cited in the press as being a style icon and has frequently topped lists of the best-dressed women in the world. In 2004, Blanchett was named the third most naturally beautiful woman of all time by a panel of beauty and fashion editors, make-up artists, model agencies, and photographers, behind Audrey Hepburn and Liv Tyler. She was on Empire‘s list of the “100 Sexiest Movie Stars of All-Time” in 2007 and 2013.