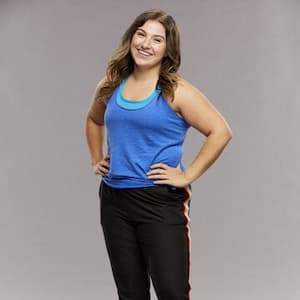 Britini D’Angelo is an American reality tv show personality and kindergarten teacher. She is one of the houseguests in the American reality show Big Brother season 23. The show has 16 contestants competing for the prize of $500, 000.

Aside from being a kindergarten teacher, Britini is a karate pro. In December 2020, she was promoted to the rank of 4th degree black belt in the Chuck Norris System. She is a three-time world champion at the United Fighting Arts Federation World Championships Tournament.

In addition to her many talents, she is also a dancer. She has danced for 19 years now. She is a dance and Musical Theatre teacher and Assistant at a local studio. D’Angelo plays four musical instruments.

D’Angelo is 24 years old as of 2021. She was born in 1997 in Niagara Falls. However, there is no further information about her date of birth. This information will be updated as soon as it is available.

D’Angelo stands at a height of 5 feet 2 inches. There is no further information about her body measurements.

D’Angelo was born and raised in Niagara Falls, New York. She was born to her parents whose information she has not yet disclosed. Britini is very private about her personal life and prefers to keep some details away from the public.

D’Angelo went to Niagara University with a master’s degree in Early Childhood & Childhood Education. She earned additional certifications in Special Education 1-6 and Theatre Education K-12. In school, she won both the Niagara Medal and the Senior Medal. She was the first individual in the 162-year history of the university to win both awards in the same year.

D’Angelo revealed that she is autistic at the start of the show. She stated that she was diagnosed with the disability just before she turned 2 years old.

D’Angelo is one of the contestants on the 23rd season of the American reality television show Big Brother. She gets to compete against her fellow 15 contestants for the chance to win a prize of half a million.

When asked about her winning strategies, she says, “To never forget who I am as an individual, be AUTHENTIC in the house, win competitions in order to secure relationships/alliances in the house, and not be afraid to make the BIG MOVES! Big risk means even bigger reward”

D’Angelo appears to be currently single. She hasn’t revealed any information about her relationship status therefore, it is not known if she has a boyfriend or not.