A native of Miami, Florida, United States, Brian Regan is a popular American stand-up comedian who uses sarcastic,  observational, and self-deprecating humor. He is known for incorporating facial expressions and body language into his act.

Regan attended Christopher Columbus High School where he was always a fan of Steve Martin, The Smothers Brothers, and Johnny Carson.

He attended Heidelberg College in Ohio, where he played wide receiver on the football team. Initially, he had plans of being an accountant, but one of his football coaches saw his comic routines and encouraged him to consider communications and theater. During his last semester in 1980, he dropped out of school to pursue stand-up comedy and later finished his degree in 1997. 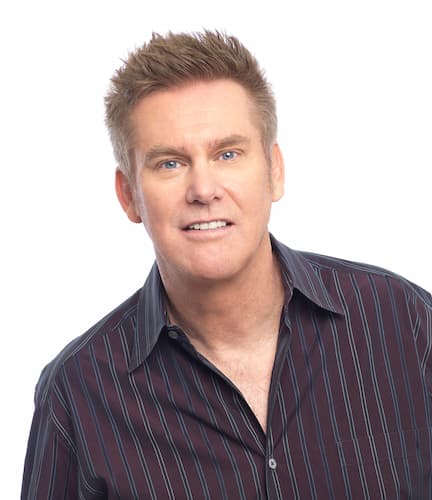 Regan was born in Miami, Florida, to his parents and was raised in Westchester, Florida. He is of Irish descent. Our efforts to find out more about his family came to no avail s no such information is publicly available. Thus the identity of his father and mother is still unclear.

All that we have gathered is that Brian’s brother, Dennis Regan, also makes his living as a stand-up comedian. He has other siblings including seven brothers.

Regan was married to his wife Kathleen Regan, but they eventually divorced in the year 2011. His second special Comedy Central, entitled Hyperbole’s Epitome, premiered on 6 September 2008. On 9 September 2008, a performance DVD was released. He signed a deal with Jerry Seinfeld and Netflix in 2017 to release two stand-up specials.

Since his divorce, he has not made any public impressions with his girlfriend, fiance, or partner. He has kept his personal love life away from the public. We will update this section once we get any information about his love life.

He has two kids who are the fruits they bore with Kathleen while together. In 2019, Regan and his son Chris played Mario Kart 8 on Guest Grumps, a Game Grumps spin-off series.

Regan has an estimated net worth of  $7 Million.

He has acquired distinction among his comedy peers including Jerry Seinfeld who has described him as “one of my favorite, favorite stand-up comedians”.Seinfeld has invited him on his show Comedians in Cars Getting Coffee twice in 2012 and in 2018.

Seinfeld also served as an executive producer on Regan’s sketch series Standup and Away! (2018). In an interview with CBS News Seinfeld stated, “He’s really the most beloved guy out there by other comedians because of the quality of his stuff”.Other comedians to have praised Regan include Jimmy Fallon, Chris Rock, David Letterman, Norm Macdonald, Patton Oswalt,  and Bill Burr.

Mr. Regan’s comedy career began inauspiciously when he dropped out of Ohio’s Heidelberg College to become a busboy at the Comic Strip in Fort Lauderdale, Fla., in the early 1980s. After shows, he’d take to the stage as people were filing out. Finally, he began working on the road full-time, just as a new stand-up boom launched.

After almost 40 years as a comedian, he is still inarguably one of the most jovial, likable stage presences out there. His reputation as a “clean comic” has damaged his credibility amongst coastal audiences these days, but he remains a heartland favorite, and it’s easy to see why when watching Stand Up and Away!, his hybrid stand-up/sketch series for Netflix.

The format of the show basically adapts the Chapelle Show and Key & Peele format to be more stand-up specific. He performs bits before throwing to video that either continues the premise of the bit or goes in its own direction. To do this, he enrolls the help of his “floor producer” Beth Triffon, a winning presence who is given an impossible job in the context of the show.

Triffon practically acts as the sidekick here, but the problem is that in a show that needs to go from stand-up to interjection to sketch, the interjections from Triffon are doomed to feel inorganic, despite her best efforts. Stand-up of the Regan variety often hinges on the suspension of disbelief that these are off-the-cuff observations, and this is undercut by the format of the show, which reveals the seams of the narrative in spite of itself.

That said, Regan’s gentle presence doesn’t necessarily impede the material. In the first episode, he turns his iconic Dad-ish energy towards the cockiness of Neil Armstrong at cocktail parties “interjecting in another conversation with “that reminded me, once I was driving in the Sea of Tranquility…”, or a hearing aid that markets itself by noting you’ll be able to hear other people whispering (“they didn’t invent whispering for compliments”).

This energy floats the show most of the time, but can’t dig it out of a format that just lacks enough focus to really get going.

In a craft that is said to be all about timing, it has taken comedian Regan nearly 40 years of performing to feel like he’s arrived. The 60-year-old has been doing stand-up since the early 1980s, when he used to steal 5 minutes on stage while bussing tables at a comedy club in Fort Lauderdale, Fla.

He’s built an impressive career with his self-deprecating humor and can point to many achievements, including years of sold-out shows and 28 appearances on CBS’s “Late Show with David Letterman.” But he’s never been a household name or attained Hollywood fame.