Gomes was born to his mother Jeannie Gomes in Sarasota Florida. He likes to keep his personal life private hence has not yet disclosed any more information about his family. 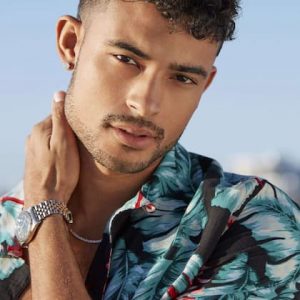 Through an Instagram post, Gomes and his girlfriend Camilla Cattaneo officialized their relationship on March 21, 2018. He previously dated his Siesta Key co-star Madisson Hausburg.

Gomes attended Riverview High School where he used to play football for the Riverview Rams.

Gomes started his modeling career at the age of 16. He had his early local modeling on billboards for Ron Jon in Florida and consistently in local newspaper circular advertising.

He signed with Click Model Management in New York while still in high school and was on his way to the Big Apple at the age of 18 shortly after graduation.

Gomes moved back to Florida, where he signed with a modeling Agency in Miami MC2. This move allowed him to spend more time in the studio working on his music along with Producer EJ of Drummer Boy Entertainment and was excited to have some collaborations in the works.

Due to his connections in Florida he had an opportunity to star in a supporting role as Danny in the Sarasota Film Festival Premier of “The First Time Club” directed by KT Curran. The movie also features some of Gomes’s music with “Different Persona” in the Sound Track.

When the movie was done, his childhood friend, Alex Kompothacras approached him to work with him on a Docu Drama-type Reality TV show based on Alex’s life here on Siesta Key. So, he became a cast member of the MTV show Siesta Key, which is an American reality TV series that airs on MTV and premiered on July 31, 2017. An early 2000s reality television series Laguna Beach: The Real Orange County inspired the show.

He stars in the show along with Juliette Porter, Alex Kompothecras, Kelsey Owens, Madisson Hausburg, Garrett Miller, and Chloe Trautman.

Gomes has an estimated net worth of $500 thousand.