Bill Kurtis is an American tv journalist, tv producer, narrator, and news anchor currently serving as the announcer for National Public Radio’s news comedy show Wait Wait… Don’t Tell Me! He first joined the show in 2009 filling in for announcer Carl Kasell. On May 24, 2014, he replaced Carl.

He has also hosted several A&E crime and news documentary shows. He has previously anchored The CBS Morning News. Bill served as a news anchor for WBBM-TV.

Bill stands at an average height of  5 feet 7 inches which is approximately 1.69 meters. He weighs about 74 Kgs. However, there are no further details about his body measurements.

Kurtis was born and raised in Pensacola, Florida. He was born to his parents Wilma Mary Horton and William A. Kuretich. His father was a United States Marine Corps brigadier general and decorated veteran of World War II. He is of Croatian descent. His sister Jean Schodorf is a former Kansas Senate Whip.

His second marriage is to Donna La Pietra. After being together for 40 years, they finally tied the knot on December 13, 2017. Donna is a former Chicago TV news producer and partner in Kurtis’s Productions company.

Kurtis attended Independence High School. He later enrolled at the University of Kansas where he graduated with a Bachelor of Science degree in journalism in 1962. He also earned his Juris Doctor degree from Washburn University School of Law.

Bill began his radio career at the age of 16 when he became an announcer for Independence high school’s radio station KIND. While in college, he worked part-time at WIBM-TV. He joined WIBM-TV on June 8, 1966, after a friend asked him to fill in for him as an anchor for the 6 pm news.

After his coverage of the Tornado outbreak sequence of June 1966, Kurtis decided to change career paths from law to journalism. He was later hired by WBBM-TV in Chicago. During his time with CBS, he was able to cover major stories including the assassination of Martin Luther King Jr. and when Robert F. Kennedy was shot. 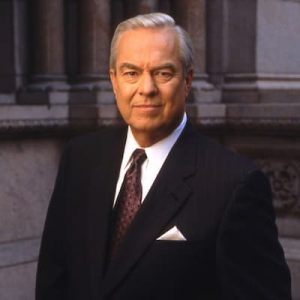 In 1969, he joined CBC News in Los Angeles after covering the Chicago Seven conspiracy trial. In 1973, he went back to WBBM-TV as a news anchor. On his return, he did an investigation on the Agent Orange story about the U.S veterans who were sprayed by defoliant when they were in Vietnam.

Later in 1982, Bill joined The CBS Morning News in New York City, CBS Early Morning News, and also anchored three CBS Reports: The Plane That Fell from the Sky, The Golden Leaf, and The Gift of Life. He again returned to WBBM in 1985 and in 1986, he became the host of PBS’s science series The Miracle Planet.

In 1987, he hosted a four-part series on the Central Intelligence Agency. He also produced “Return to Chernobyl” for the series Nova on PBS. His production company also produced nearly 500 documentaries for PBS’s series including The New Explorers.

In 1994, Bill documented the Richard Speck story on both WBBM-TV and A&E Network. In addition, Kurtis has narrated a multimedia book by Joe Garner titled We Interrupt This Broadcast. He has also authored three books titled Death Penalty on Trial (2004), On Assignment (1984), and Prairie Table Cookbook (2008).

Bill has served as the lead host of Through the Decades on Decades network since June 2015. Kurtis has narrated several a number of documentaries and films including; the 2010 documentary film Carbon Nation, and the 2004 film Anchorman: The Legend of Ron Burgundy, and its sequel Anchorman 2: The Legend Continues (2013).

Bill was named the Voice of Illinois Tourism on July 8, 2013. In 1988, Kurtis founded his own production company Kurtis Productions. Throughout his career, he has received two Peabody Awards and numerous Emmy Awards. He has also received awards from the Overseas Press Club, a duPont, and the University of Kansas William Allen White citation award.

As of 2020, Bill’s net worth is estimated to be at $15 million. He has earned all his wealth from his successful career as a journalist. He also owns a production company, Kurtis Productions.