Barbara Jill Walters a native of Massachusetts is an American retired journalist, author, and television personality. She has hosted a number of tv programs including; Today, The View, 20/20, and the ABC Evening News. Walters started her career in 1951 and retired in 2015.

She joined The Today Show in the early 1960s as a writer and segment producer. She became the show’s co-host in 1974. Barbara was the first female co-anchor on the ABC Evening News. In 1979, she became a producer and co-host on ABC’s newsmagazine 20/20. In 1989, Barbara was inducted into the Television Hall Of Fame. She received her Hollywood Walk of Fame star in 2007.

Walters stands at an estimated height of 5 feet 5 inches and weighs about 57 kg. Her body measurements are 34-26-36 inches. Her hair color is blonde paired well with her hazel eyes.

Walters was born in Boston, Massachusetts where she also grew up. She was born to her Jewish parents Dena and Louis Walters. Her parents were descendants of refugees from the former Russian Empire. Walters has three siblings; Jacqueline Walters, Walda Walters Anderson, and Burton Walters. Burton passed away in 1944 of pneumonia. Her sister Jacqueline was born mentally disabled. She died in 1985 of Ovarian cancer. Barbara went to

Walters has been married three times. Her first marriage was to Robert Henry Katz a business executive and former Navy lieutenant. They got married in on June 20, 1955, and got an annulment in 1957. Her second marriage was to Lee Guber, a theatrical producer and theater owner. 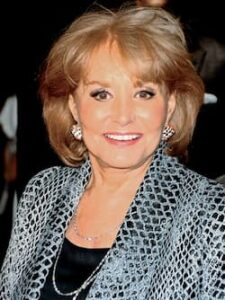 Walters has one daughter called Jacqueline Dena Guber born in 1968. Walters and her second husband Lee Guber adopted Jacqueline in 1968 the same year she was born. Walters and Lee got married in 1963 and divorced in 1976.

In 2010, Walters went through an open heart surgery to replace a faulty aortic valve. She had announced the news of her surgery in May that year. Prior to the surgery, she was suffering from aortic valve stenosis. Her spokeswoman Cindi Berger announced that the surgery went well and her doctors were pleased with the outcome.

Walters was the host of the tv program Barbara Walters’ 10 Most Fascinating People. The show was a compilation of ten public figures in the industries of entertainment, sports, politics, and popular culture. The show aired on ABC every second Thursday of December from 1993 to 2015.

Walters joined The Today Show in 1961. She first worked as a writer and researcher. In 1974, she became the first female co-host of the show. She was also the host of her own show Not for Women Only which premiered in 1971. In 1976, she joined ABC Evening News where she served as a co-host until 1978.

In addition, she worked on the ABC newsmagazine 20/20 in 1979. Walters appeared in multiple ABC news specials as a commentator including the coverage of 9/11. In 1977, she interviewed both Egypt’s president, Anwar Al Sadat, and Israel’s Prime Minister, Menachem Begin.

She has interviewed multiple world leaders including; the Shah of Iran, Mohammad Reza Pahlavi, Fidel Castro, and Vladimir Putin. In 1997, Barbara became the host of the daytime talk show The View alongside Bill Geddie. She was also the co-creator and co-executive producer of the show.

She made the announcement on the May 13, 2013, episode of The View. She however came out of retirement to host a special 20/20 interview with Peter Rodger. Walters had a final on-air interview with presidential candidate Donald Trump for ABC News in December 2015.