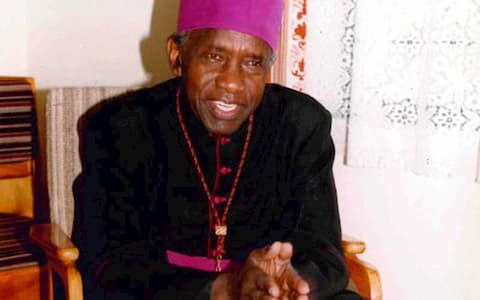 From Mwala, Machakos, Raphael Ndingi Mwana a’Nzeki was a retired Archbishop of the Roman Catholic Archdiocese of Nairobi.

Mwana a’Nzeki had also served as the bishop of Machakos and Nakuru.

There is no information available on Mwana a’Nzeki’s parents or siblings if he had any. We will provide this information as soon as it is available.

After completing his primary school education, Ndingi Mwana a’Nzeki joined Kiserian Seminary. In 1961, he was ordained as a priest and served under then-Archbishop JJ McCarthy of the Nairobi Diocese.

In the year 1969, Ndingi was ordained as a bishop. As a bishop, he served in the dioceses of Machakos and Nakuru.

In 1996, Ndingi Mwana a’Nzeki was appointed as Coadjutor Archbishop of Nairobi, as the assistant to then-Cardinal Maurice Michael Otunga.

Ndingi succeeded Cardinal Otunga as the Archbishop of Nairobi on April 21, 1997. He was retired by Pope Benedict XVI on October 6, 2007, after attaining the age of 75 years.

Ndingi was succeeded by Cardinal John Njue who was his assistant in Nakuru.

Ndingi Mwana a’Nzeki died on March 31st, 2020, at the age of 88 years. Cardinal John Njue announced the passing of the Archbishop. “Let us pray for the repose of his soul,” Njue wrote in a Facebook post.