A native of New Orleans, Louisiana, Anthony Mackie born Anthony Dwane Mackie is an American actor. Dwane has been featured in films, television shows, and Broadway and Off-Broadway plays.

He was featured in Drowning Cow, Ma Rainey’s Black Bottom, and A Soldier’s Play. In 2002, Anthony won an Obie Award for his role on Carl Hancock Rux’s Talk.

The talented actor, Anthony Dwane Mackie, was born on September 23rd, 1978 in New Orleans, Louisiana, United States. Dwane is 42 years old as of 2020. He celebrates his birthday on September 23rd every year. 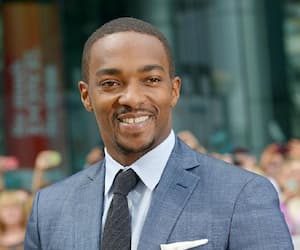 Dwane Mackie is the loving son of Martha Gordon, his mother, and Willie Mackie Sr., his father. His father was a carpenter who owned a roofing business, Mackie Roofing. Anthony has a brother called Calvin Mackie who is a former associate of engineering at Tulane University. Calvin currently works at the Louisiana Recovery Authority.

Dwane married his long-term girlfriend and childhood sweetheart Sheletta Chapital in 2014. Unfortunately, the two divorced in 2018. Prior to their divorce, they had been blessed with four children.

Mackie attended Warren Easton Sr. High School and the New Orleans Centre for Creative Arts (NOCCA). In 1997, Anthony graduated from the high school drama program at the North Carolina School of the Arts(NCSA). He later graduated from The Juilliard School’s Drama Vision as a member of Group 30 (1997-2001), which also included actors Tracie Thoms and Lee Pace.

In 2002, Mackie worked as an understudy to Don Cheadle in Suzan-Lori Parks’ play Topdog/Underdog and won an OBIE Award for his role in Carl Hancock Rux’s play Talk. In 2002, Dwane appeared in 8 Mile as the main antagonist, Papa Doc. Anthony first starred in a featured independent film Brother to Brother in 2003.

In the film, he played the role of Perry, a young artist, who struggles to adjust to the world as a gay black man. The following year he appeared in Million Dollar Baby, which won the Academy Award for Best Picture, and also starred in Spike Lee’s She hate Me. Dwane starred in Half Nelson, and Crossover, We Are Marshall in 2006.

The following month, Disney confirmed a Marvel television series starring Mackie and Sebastian Stan, called The Falcon and the Winter Soldier, would be aired on their upcoming Disney+ streaming service, debuting on March 19, 2021. In June 2019, it was announced that Mackie will star in a lead role in the Netflix science-fiction film Outside The Wire.

Anthony Mackie Net Worth and Salary

The American-born actor, Anthony Dwane Mackie, has an estimated net worth of $2 million. He has acquired the majority of his fortune from his acting career as well as from his other businesses. His annual salary is currently under review and will soon be updated.