Anson Mount is an American actor. He is famously known for starring as the fictional character Cullen Bohannon in the AMC western drama series Hell on Wheels, and as Jim Steele in the short-lived NBC series Conviction. Mount also starred as the Marvel Comics superhero Black Bolt in Marvel’s Inhumans, and as Captain Christopher Pike in season 2 of Star Trek: Discovery, a role which he is set to reprise in Star Trek: Strange New Worlds.

Mount also starred opposite Britney Spears in the coming of age film Crossroads (2002). Nonetheless, he is a member of the Board of Directors of METI (Messaging Extraterrestrial Intelligence). 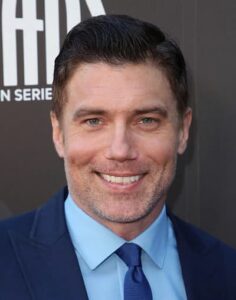 Mount is the loving son of Nancy Smith and Anson Adams Mount II. His mother, Nancy, is a former professional golfer while his father was one of the original contributing editors to Playboy magazine. Mount has two siblings: Anson Adams Mount III and Kristin Mount.

Mount is currently married to Darah Trang. Darah Trang is a Canadian-born photographer. The couple got engaged on July 8, 2017, and later tied the knot on February 20, 2018. Together, the couple welcome their first child, Clover,  in December 2021.

Mount has an estimated net worth of $3 million US. This includes his assets, money, and income. He accumulates a huge amount of his wealth from his successful career as an actor.

Mount starred in Terrence McNally’s Corpus Christi in 1998. He was honored by the Drama League. In 2008, he made the finalist list for the American Playwrights Conference at the O’Neill Center in 2008 for his play Atomic City. He earned Maxim Mazumdar New Play Prize for his one-act play Love Liza Mount made is featured film in 2000 as Tully Coats in the independent film Tully.

In 2009, he produced and starred in an independent film called Cook County. He earned awards at several major film festivals, including Hollywood, AFI Dallas, Nashville, SXSW, and others. Anson is famously known for starring Cullen Bohannan on AMC’s hit series Hell on Wheels. In 2018, he starring Captain Christopher Pike of the Starship Enterprise in the CBS series Star Trek: Discovery. In May 2020 it was announced that Anson would star as Pike in a new series, Star Trek: Strange New Worlds.