A native of Ouidah, Benin, Angélique Kidjo is a five-time Grammy Award-winning Beninese activist, actress, and singer-songwriter who is noted for her diverse musical influences and creative music videos.

Kidjo began singing in her school band, Les Sphinx, and discovered triumph as a teenager with her adaptation of Miriam Makeba’s “Les Trois Z”, which was played on national radio. Kidjo recorded the album Pretty with the Cameroonian producer Ekambi Brilliant and her brother Oscar.

It featured the songs “Ninive”, “Gbe Agossi” and a tribute to the singer Bella Bellow, one of her role models. The success of the album allowed her to tour all over West Africa. Continuing political conflicts in Benin prevented her from being an independent artist in her own country and led her to relocate to Paris in 1983. 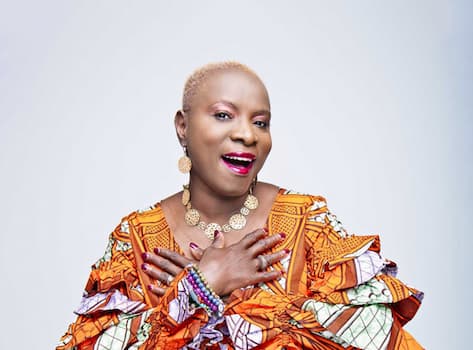 Kidjo was born and raised in Ouidah, Benin by her parents. Her mother is from the Yoruba people in Nigeria and her father is from the Fon people of Ouidah. She has a brother called Oscar Kidjo.

Kidjo married a loving and devoted French producer and musician Jean Hébrail in 1987. They were blessed with a daughter Naima was born in 1993 in France.

Kidjo has an estimated net worth of $5 million.

Kidjo has been a UNICEF Goodwill Ambassador since 2002. With UNICEF, she has traveled to many countries in Africa.

Along with Mary Louise Cohen and John R. Phillips, Kidjo founded The Batonga Foundation, which empowers some of the most vulnerable and hardest-to-reach young women and girls in Benin with the knowledge and skills they need to be agents of change in their own lives and communities.

Batonga achieves this by locating the most vulnerable adolescent girls in Benin and connecting them to girl-centered safe spaces led by Beninese women. These safe spaces provide young women and girls with training that allows them to gain new skills in financial literacy and build social capital.

She campaigned for Oxfam at the 2005 Hong Kong WTO meeting, for their Fair Trade Campaign and traveled with them in North Kenya and at the border of Darfur and Chad with a group of women leaders in 2007, and participated in the video for the in My Name Campaign with the will.i.am from the Black Eyed Peas.

Since March 2009, she has been campaigning for “Africa for women’s rights”. This campaign was launched by The International Federation of Human Rights (FIDH).

On September 28, 2009, UNICEF and Pampers launched a campaign to eradicate Tetanus “Give the Gift of Life” and asked Kidjo to produce the song “You Can Count On Me” to support the campaign. Each download of the song donates a vaccine to a mother or a mother-to-be.

In June 2010, she contributed the song “Leila” to the Enough Project and Downtown Records’ Raise Hope for Congo compilation. Proceeds from the compilation fund efforts to make the protection and empowerment of Congo’s women a priority, as well as inspire individuals around the world to raise their voices for peace in Congo.

Kidjo has partnered with producer Jeff Bhasker (Rihanna, Kanye West, Harry Styles, Bruno Mars, Drake, Jay-Z) to create Remain In Light – a new project that finds the Benin-born artist reclaiming rock for Africa, bringing Talking Heads’ landmark 1980 album full circle. That record is a track-by-track re-imagination of the original, considered to be one of the greatest albums of the ’80s and deeply influenced by music from West Africa, notably Fela Kuti’s afrobeat.

With her version of Remain In Light, Angélique celebrates the genius of Talking Heads, Brian Eno, and the touchstones that made the original so revered and injects it with her euphoric singing, explosive percussion, horn orchestrations, and select lyrics performed in languages from her home country.