Mitchell moved on to attend the University of Pennsylvania after she graduated from New Rochelle High School where she acquired a Bachelor of Arts degree in English literature in 1967. While at Penn, she acted as news administrator of student radio station WXPN.
After graduation, she was employed as a journalist at KYW radio. She grew to distinction as the station’s City Hall reporter, during Mayor Frank Rizzo’s administration and also reported for sister station KYW-TV. 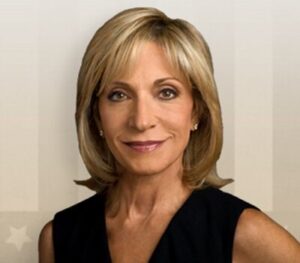 Mitchell was brought up in a Jewish family in New Rochelle, New York, Her father Sidney was the partial owner of a furniture manufacturing company in Manhattan and chief executive officer.
Her mother Cecile was a manager at the New York Institute of Technology in Manhattan. Mitchell’s brother Arthur and his wife, Nancy Mitchell, moved to British Columbia in the 1970s. He has dual American and Canadian citizenship, becoming a member of the Legislative Assembly of Yukon and the leader of the Yukon Liberal Party in the 2000s.

Mitchell has been wedded to a blessed husband Alan Greenspan for 25 years. The couple met in 1983 when Andrea canvassed Alan for a story and later married in a private ceremony in 1997 and have been together ever since.

The journalist Mitchell was previously married to Gil Jackson, but the wedlock ended in the mid-1970s. Despite her healthy relationship and prolonged wedding to Alan Greenspan, the two don’t have kids, nor have they adopted one. Rather, the only important member of the family is Andrea’s god-daughter

Mitchell has an estimated net worth of $5 million.

Mitchell has been with NBC News since late July 1978.

Since 2008, Mitchell has hosted a program on NBC’s news and commentary channel MSNBC titled Reports. It broadcasts on weekdays at 12:00 noon ET.

However, the journalist revealed in a 2011 MSNBC broadcast that Mitchell had been diagnosed with breast cancer following a routine screening. She underwent therapy, which was thriving because it was realized earlier.

The most exciting thing about Mitchell is that she began her media career while still at the university. She worked as the news director of the student radio station WXPN.

After her graduation, she didn’t leave Philadelphia and was hired as a KYW radio reporter. And because of her impressive skills, she didn’t take long to rise to the role of the station’s City Hall correspondent while reporting for KYW-TV.

Andrea then moved to WTOP (now WUSA) in 1976, a CBS station in Washington, D.C. She changed her job title to a general correspondent two years later after joining NBC’s network news.

In 1979, the talented news anchor was named the NBC News energy correspondent. This was one of the most defining moments in her career as she reported on the late 1970s energy crisis and the Three Mile Island nuclear incident.