Poehler was born to her parents William Poehler and Eileen both school teachers. She grew up alongside her younger brother, Greg, who is a producer and actor 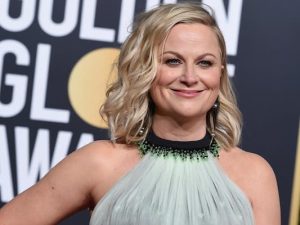 Poehler attended Burlington High School and later graduated from Boston College with a bachelor’s degree in media and communications in 1993.

Poehler studied improv at Second City and ImprovOlympic in Chicago. In 1996, she and other founders co-founded the comedy troupe Upright Citizens Brigade.

Also, she has done voice work for Shrek 3, Horton Hears a Who!, Inside Out, and the animated series The Mighty B!, which she also produced. Welcome to Sweden, Wide City, Difficult People, Duncanville, Three Busy Debras, and Russian Doll all have Poehler as an executive producer. She played Eleanor in the live-action/CGI Alvin and the Chipmunks movie franchise until 2015 when Kaley Cuoco took her place.

Poehler has an estimated net worth of $25 million.