A native of Miami, Florida, Alexander Acosta is an American attorney, academic, and politician who was the 27th United States Secretary of Labor.
Acosta was the first and only Hispanic person to serve in Trump’s cabinet as of January 2019. He had been appointed to the National Labor Relations Board by President George W. Bush. He later served as Assistant Attorney General for Civil Rights and federal prosecutor for the Southern District of Florida.

As for Alexander’s family, nothing much is known except that his parents are Cuban immigrants.

Acosta is married to Jan Acosta. The couple has two children. 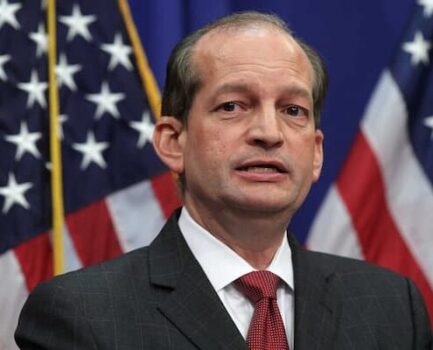 While serving as the U.S. attorney for Southern Florida in 2007, Alexander approved a controversial plea agreement with billionaire serial child molester Jeffrey Epstein. In late 2018, Alexander’s name was being circulated as a possible successor to Trump Administration Attorney General Jeff Sessions, the Epstein case became a focus of Congressional concern.

Later after, Miami Herald published a detailed report critical of Alexander’s work on the case in which Jeffrey Epstein, was said to have recruited minor girls from Palm Beach County middle schools and high schools for paid sexual activities at his Florida mansion.
Alexander had approved a federal non-prosecution agreement under which Epstein, along with four co-conspirators and any unnamed “potential co-conspirators”, were granted immunity from all federal criminal charges. In order to avoid prosecution, Jeffrey Epstein agreed to plead guilty to two state prostitution charges, register as a sex offender, and pay restitution to three dozen victims identified by the FBI.

He was thereafter sentenced by the state court to 18 months’ incarceration, and he served 13 months, followed by a year of probation.
Jeffrey served his sentence in a private wing of the Palm Beach County jail, with work release to his office allowed for up to 12 hours a day six days a week.
While on probation, Jeffrey Epstein was allowed numerous trips on his corporate jet to his homes in Manhattan and the U.S. Virgin Islands.

Later in 2011, in a public letter regarding the case, Alexander himself seemed to express dissatisfaction with the terms of Epstein’s incarceration, stating: “Epstein appears to have received highly unusual treatment while in jail. Although the terms of confinement in a state prison are a matter appropriately left to the State of Florida, and not federal authorities, without doubt, the treatment that he received while in state custody undermined the purpose of a jail sentence.” The immunity agreement and Jeffrey Epstein’s lenient treatment while incarcerated were the subjects of ongoing controversy, with the Miami Herald saying in 2018 that Alexander Acosta gave Epstein “the deal of a lifetime”.

On Friday, 12, July 2019, Alexander said that he will resign. He is resigning amid controversy over the way he handled a sex crimes case against wealthy businessman Jeffrey Epstein a decade ago when he was U.S. attorney for southern Florida. He made the announcement to reporters while standing next to President Donald Trump outside the White House. Trump said Alexander had called him Friday morning and that it was his decision to quit.

“This was him, not me, because I’m with him,” Donald Trump said in a lengthy exchange with the press before departing the White House en route to events in Wisconsin and Ohio. “I said, ‘You don’t have to do this.’”

His resignation letter to President Trump, read in part, “It has meant so much to me that you have offered your steadfast support in our private discussions and in your public remarks.” But “your agenda, putting the American people first, must avoid any distractions.”
Below is his resignation letter; 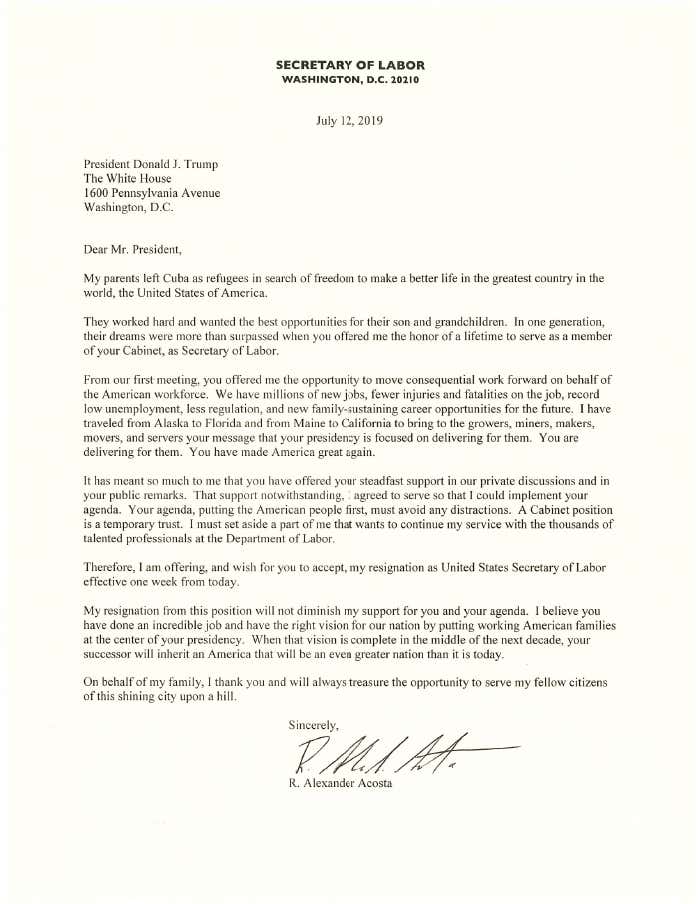