However, he hosts The Alex Jones Show from Austin, Texas, which the Genesis Communications Network syndicates across the United States and online.

Jones attended Anderson High School, where he played football, and graduated in 1993. After graduating, Jones briefly attended Austin Community College before dropping out. 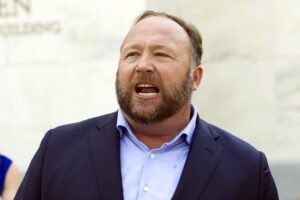 Jones was born on February 11, 1974, in Dallas, Texas, and was raised in the suburb of Rockwall. His father was a dentist and his mother was a homemaker. He claims Irish, English, Welsh, German,  and Comanche descent.

Jones has three kids with his former wife Kelly Jones. The partners divorced in March 2015. In 2017, Kelly sought sole or joint custody of their kids due to her ex-husband’s behavior. In April 2020, a state district judge denied an emergency motion by Kelly to secure custody of their daughters for the next two weeks after Jones led a rally at the Capitol, where he was mobbed by supporters and called COVID-19 a hoax.

His son, Rex Jones, has worked for InfoWars. He married Erika Wulff Jones in 2017 and they have one child.

Jones has an estimated net worth of between $135 million and $270 million.

Jones is a vocal gun rights advocate. MTV labeled him a “staunch Second Amendment supporter”, while The Daily Telegraph in London called him a “gun-nut”.

In January 2013, he was invited to speak on Piers Morgan’s CNN show after promoting an online petition to deport Morgan because of his support of gun control. In the ensuing debate with Morgan, Jones stated that “1776 will commence again if you try to take our firearms”. Jones was referring to the American Revolutionary War in relation to theoretical gun control measures taken by the government.

Jones said he owned around 50 firearms. Morgan said on CNN’s Newsroom the following evening he couldn’t conceive of a “better advertisement for gun control than Alex Jones’ interview last night”. On his own show, according to The Atlantic, Glenn Beck said Morgan “is trying to make everybody who has guns and who believes in the Second Amendment to be a deterrent to an out-of-control government look like a madman. So now he immediately books the madman and makes him look like a conservative.”

On September 27, 2021, a district judge in Texas issued three default judgments against Jones, demanding him to pay all damages in two lawsuits. These rulings came after Jones repeatedly failed to hand over documents and evidence as ordered by the court, which the judge characterized as “flagrant bad faith and callous disregard for the responsibilities of discovery under the rules.”

On November 15, 2021, a superior court judge in Connecticut issued another default judgment in the fourth defamation lawsuit against Jones, and the amount he must pay the families will be determined at trial. As part of the legal settlement made against him, Jones claimed assets of $6.2 million in January 2022.

On or about March 29, 2022, Jones offered a settlement of $120,000 to each of the thirteen people involved in the lawsuits, which was quickly rejected.