A native of Karachi, Pakistan, Ahad Raza Mir is a Pakistani actor who emerges in the Urdu television series. Mir has established a career in Pakistan and is the recipient of several honors including the Lux Style Awards.

Mir attended a Performing Arts High School and graduated from the University of Calgary with a Bachelor of Fine Arts degree. He began his career in 2010 at age 17, playing a brief role as the son of Sania Saeed and Faisal Rehman in Hum TV’s romantic drama Khamosiyan.

Mir was born and raised in Karachi, Sindh, Pakistan by his caring and loving parents. He is the son of Asif Raza Mir, a veteran actor, and producer in the Pakistani television and film industry. His paternal grandfather, Raza Mir, was a filmmaker who also acted as cinematographer for the first ever Pakistani film, Teri Yaad (1948). He has a younger brother, Adnan Raza Mir. 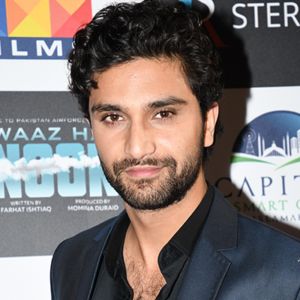 Mir got engaged to actress Sajal Aly on 6 June 2019 and married her in Abu Dhabi on 14 March 2020. The partners officially announced their divorce in March 2022. Any information regarding his kids is publicly not available. We will update this section as soon as the information is available.

Mir has an estimated net worth of $1.5 Million.

In 2017, Mir began auditioning for Hum TV’s production house MD Productions and was cast in a leading role in Yaqeen Ka Safar and a supporting role in the social drama Sammi opposite Mawra Hocane, the latter went into production early but he gained wider recognition and fame with the former where he played a grief-stricken brother as Dr. Asfand Yaar, alongside Sajal Aly and Hira Mani.

His performance earned him Lux Style Award for Best Actor and won three Hum Awards including the Hum Award for Best Actor. He attributes his success to producer and filmmaker Momina Duraid, Mir said in an interview, “Momina Duraid has followed my career closely for the longest time. I was in Canada when she called me to offer the part. The goal has been to do a film since I was very young, and so I knew that I had to pack my bags and come to Pakistan right away.”

Coming from a significant filmmaking family, Ahad was accused of nepotism. Responding to such claims Mir said, “People kept telling me I was a star kid, but I spent most of my time not knowing that. I was oblivious. I wanted people to take me, as an actor, very seriously. I’m not a social media celebrity, I’m not here to become famous; I’m here to give Pakistan some good cinema and TV.”

Mir made his Coke Studio (2018) debut as a featured artist in its eleventh season, where he performed the song “Ko Ko Korina” with Momina Mustehsan. Their rendition of the classic song was widely criticized. Within a few days of the video being released on YouTube, it became the most-disliked video in the music show’s history. Waheed Murad’s son Adil Murad also apologized to the Pakistani nation for allowing Coke Studio a remake of the song.